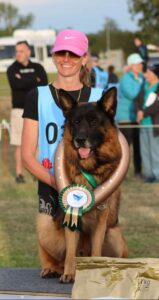 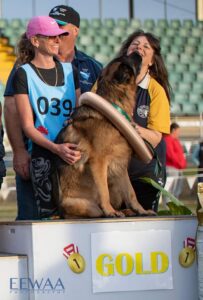 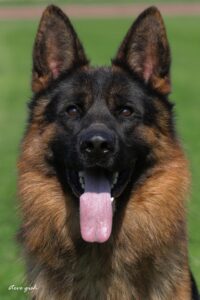 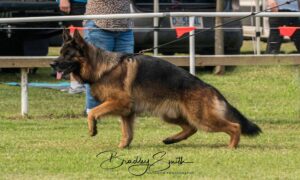 Olymp is the son of the beautiful Havanna, herself a daughter of the super Mega vom Holtkamper See, VA10 at the Sieger Show in 2009 and Sieger Remo vom Fichtenschlag.

Olymp is from the only litter in Germany from his dad, multi VA and Portugal and Mexico Sieger, *Irone du Clos de Patmisand. Irone was also highly placed at the German Sieger Show, achieving V23 in 2016. Most of his progeny however were bred in France where he produced top animals for du Val d’Anzin amongst others. Click here to see a video of Irone in action.

Olymp himself had a top show career in Germany and Europe, including V ratings and his placing of SG25 at the 2018 Sieger Show in the Junghundklasse (the equivalent of our Intermediate class).

Whilst in Germany, Olymp had a number of matings to top bitches and has produced progeny with Hip and Elbow passes, passes in breeding tests and IGP1. His oldest German progeny are not yet 2 years old, while his youngest are just 6 months (as at April 2021).

In April 2021, Olymp’s first Australian progeny were born to our own girl, Mira – *Khayem Obsesshion AZ and we look forward to watching these puppies mature.

Upon his arrival in Australia, Olymp was fully DNA profiled and tested with Orivet and his results will be available to owners of his progeny and breeders seeking to use him in their own programmes.

After less than 10 weeks from his release from Quarantine, we showed Olymp in 2 Australian shows at Newcastle & Hunter Region GSD and the GSDL. At these shows, Olymp displayed his absolutely fantastic movement, his joy of running and his anatomical correctness.

Olymp is available to approved bitches for natural matings and we have a limited amount of frozen semen also available. Please contact us for the details of his stud contract.

Some of Olymp’s show results:

In March 2021, Olymp had his German Korung confirmed by Mrs Fay Stokes and Greg Green in Newcastle.